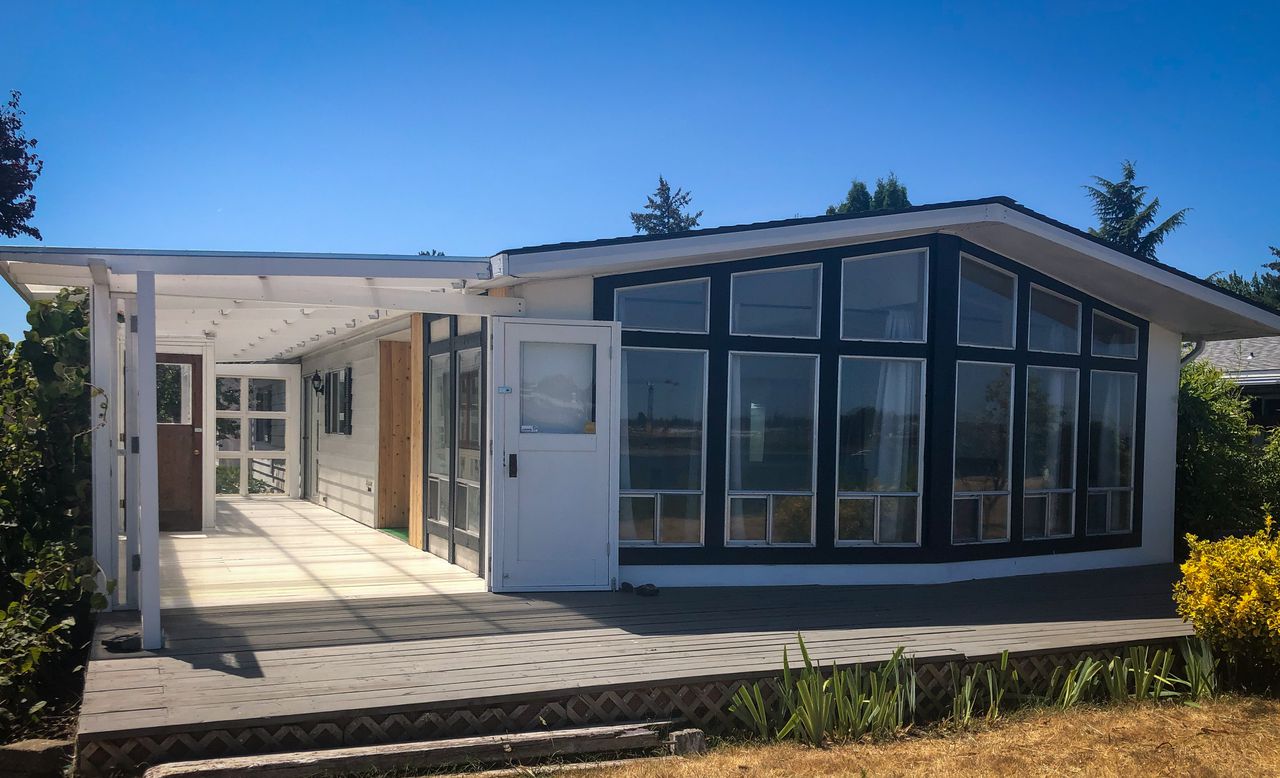 Before they were married, Hingyi and Julia Khong thought about settling down in a tiny house. Instead, the two, both designers and makers, expanded their dream and bought an old manufactured home desperately in need of do-it-yourself improvements.

By the time the Khongs held their wedding ceremony at their home on Hayden Island, they had replaced the vinyl flooring and shag carpet with white-washed oak they finished themselves.

They laid tile in the kitchen and master bathroom, and removed an ill-fitting add-on that blocked the sight of ospreys, blue herons and bald eagles flying by.

The couple said “I do” inside a glass-enclosed porch with a movable wall that reveals an unobstructed view of the Columbia River and downtown Vancouver, Washington.

“We wanted the house to feel like you’re floating on a cloud,” says Julia Khong.

Six years and career changes later, they have now listed their “magnificent” mobile home, at 1503 N. Hayden Island Dr #133, with “a million-dollar view,” for $125,000. Tammy Blackburn of NW Homebuyers is their real estate agent.

The Khongs, who recall searching for an alternative to Portland’s costly real estate market, are willing to help with financing. Taxes are about $750 a year. The rent for the space at the Hayden Island Mobile Home Park is $1,047 a month.

“Our friends and family thought we were crazy for putting so much love into a manufactured home,” says Hingyi Khong, “but it’s been a source of so much joy and peace. We had a vision for our home and somehow managed to create the space we wanted to live in.”

Renovations for the dwelling, built in 1979, were inspired by spare, midcentury Scandinavian design and colors of the era.

Warm white tones with cooler white trim were used throughout the 1,488 square feet of living space. “Even on a gray day, it feels warm,” says Julia Khong.

Wallpaper was stripped away and wood paneling was retained on a wall in the entry, living room and master bedroom to stand out against white walls.

“It does a brilliant job of warming the living room in the winter,” says Julia.

The kitchen had a popped-out pantry wall that blocked the view for half of the house. They closed up the wall and a carpenter friend installed a log pulled from the Columbia River, using handmade pegs. Moss and air plants are tucked into the crannies.

The island in the kitchen has a black walnut counter that Julia sanded and finished with food-safe oil. She also stained and finished the island’s oak shelves with beeswax. Under a custom copper light fixture is a vintage double oven and new appliances.

“We didn’t want plastic in the house, so there are a lot of copper and wood elements,” she says.

A copper shower-curtain rod hangs above the vintage clawfoot tub with a shower in the master bathroom. Shelves were made of wood, washed up from the river, that Hingyi found and dried. Julia finished them.

A professional plumber was hired to add a modern urinal and convert a century-old desk into a vanity with a double sink.

“The entire creative process was very collaborative,” says Julia, who met Hingyi when both of them were working as apparel graphic designers for Nike. “We tend to push each other. One of us would have a wild idea, and the other would say, ‘Yes, we should do that.’”

They doodled their ideas on scraps of paper. She wanted hand-finished, light-stained floors and a clawfoot tub with a live-edge black walnut shelf. He wanted a porch enclosed in windows.

He doesn’t like power tools, so she did most of the cutting and sanding.

They both wanted a playful and peaceful refuge.

When they moved in, the south-facing front yard was dust. The neighbors told them no plants would survive. They amended the soil and revived a kiwi plant that now produces fruit.

“There are three very old rose bushes that bloom with yellow, red and peach flowers,” says Julia. “We used the petals on our wedding day.”

A path leads to the river, allowing for backyard fishing and kayaking. They paddle a half mile to the West Hayden Island Nature Preserve.

“This could be your paradise away from the hustle and bustle of the city and will offer you serene evenings and beautiful city lights,” they wrote for the description of the home.

Buying the fixer-upper in 2014 and improving it mostly by themselves using reclaimed materials and remnants gave them the financial flexibility to change careers, they say.

Hingyi is a portrait artist now focused on lyric video animation in which he records himself drawing and animating for artists such as YBN Cordae and Bren Joy.

Julia is a creative and developer at ThinkShout in Portland, where she started the company’s Accessibility Initiative to help make digital spaces available to people with disabilities.

Her online projects include work for Teaching Tolerance, the Humane Society of the United States and Freedom House, a democracy watchdog.

The couple collaborated with author Emily Adler Mosqueda, a speech-language pathologist, to create a free children’s book called “My Big Feelings and the Big Bad Virus” to help families during the pandemic. Hingyi illustrated the book and Julia created the website mybigfeelings.com.

It’s available in both English and Spanish, and has been downloaded more than 500 times in 30 countries, says Julia.

The couple bought a house near Eugene in January to be closer to family. Already, they have started an art fence, put up a chicken coop and planted a garden alongside a little orchard.

“We’re sad to say goodbye to our river house, but we are ready to embrace the next adventure,” says Julia. “The house was a huge milestone in our lives, and we want the next family that lives there to experience the wonder and magic we did. We hope they sense the love we put into it.”